[Note: This blog post and the comments have been preserved for posterity from my old website, the rest of the blog is gone. This post remains as it was key to a debate over reuse of figures in Open Access Journals. See this article for more information.]

I am angry. Very, very angry. Personally I have never liked how scientific journals charge us to read the research that we produce, and that we review for them free of charge. But that is another debate for another day. What I really hate is how they abuse this power to stifle debate in the name of their business interests. This is now going to dramatically affect the quality of a paper into which I poured a huge amount of effort – a critique of the (lack of) evidence for striped nanoparticles. (More information can be found here and here.)

The oft-repeated mantra is that science is inherently self-correcting, as all science is up for debate. In theory this is true. If you come up with a new shiny experiment and the data point to a new modified theory, everyone is happy: new science has corrected old science. If, however, you stumble across a shoddily written paper in a high profile journal– something with systematic flaws or a paper with poor analysis — and you try to correct the literature, now, suddenly, you are the villain. You write a paper pointing out the flaws, submit it, and journals reject it or delay its publication for years. One journal even told us that “[We] do NOT publish papers that rely only on existing published data. In other words [We] do NOT publish papers that correct, correlate, reinterpret, or in any way use existing published literature data.” Wow! So, apparently, the old guard of closed-access scientific publishers are not interested in the idea that they might have published articles with errors in. Correcting the literature is not important!

So if the journals aren’t interested, what happens if we blog about it? Blogging is a great way to spread information. The first paper critiquing the evidence for striped nanoparticles (one I was not involved with) was published only after a two-year fight. After this, blog posts have been used to further the debate. How did the journals react to this? Science published an article mostly centred around the claim that we are bullies!

If online blogging is frowned upon, and the gate-keepers of the scientific literature are uninterested in admitting that it has ever published something containing mistakes, then how does scientific debate proceed? The obvious answer is to publish in one of the new, not-for-profit, open-access journals. Open-access publishers perhaps have less invested in protecting their brand from criticism, but still come with the peer-reviewed stamp of approval. In fact, open-access is taking off so quickly that some traditional publishers have set out to ruin its name with embarrassing poor investigative journalism. So submitting to an open-access, not-for-profit journal was our next step. And, for me, it was a step that took a huge amount of time and effort.

For months I analysed old raw data and compared it to the published data. This was all done while I was in the last busy year of my PhD, despite the work being largely irrelevant to my PhD, and not included in my thesis. Why did I do this? Because the work was so poor it offended my sense of good science and I felt that the record needed to be set straight. The final paper was written and submitted to PLoS ONE (and also uploaded to the arXiv). We had some frustrations and delays at PLoS ONE, but that is another story. Eventually our paper was accepted.

I was happy. The traditional publishers who published the work we’re critiquing can’t censor our paper now, can they? It isn’t their journal, so they can’t refuse to review/publish it. It’s also not one of these uppity blogs — it’s a peer reviewed journal, so neither the publishers nor certain members of the scientific community can look down their noses at the format.

But they still have one trick up their sleeve. Copyright. They own the copyright on the papers we criticise, and many of the new open-access journals they hate so much use Creative Commons licensing. They have the right to refuse permission to reuse parts of their figures. But just how can anyone write a self-contained critical article about data misrepresented in figures without being able to include at least some of the original results for critique and analysis?

For our paper we needed permission to reuse figures from four publishing houses. The Royal Society for Chemistry has allowed us to use their figures (and we thank them for that). Nature Publishing Group and the American Chemical Society have not yet replied — let’s hope they stand up for open debate. Wiley, however, have refused us permission to use THIS figure: 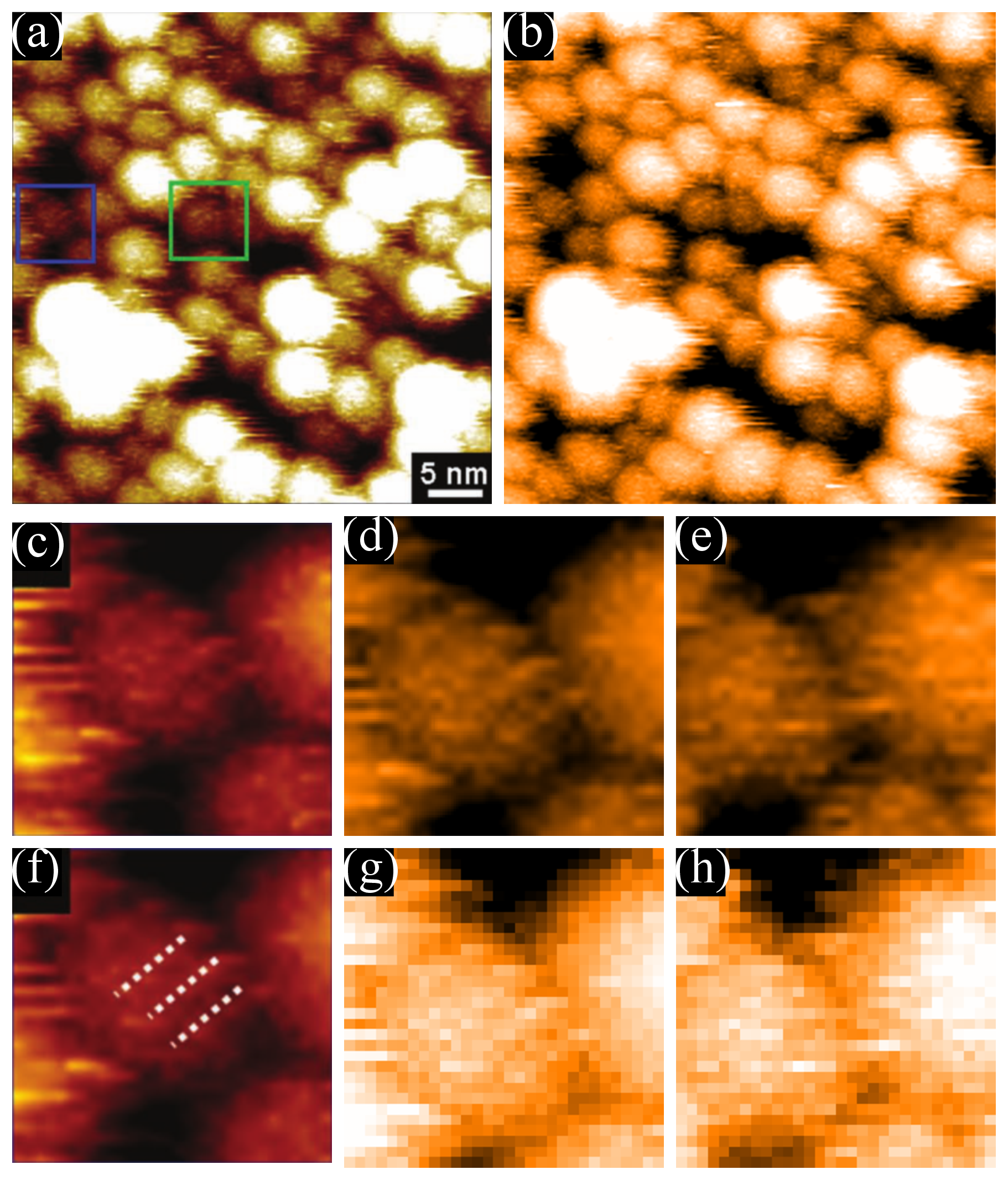 Panels a, c, and f are from the original paper. The figure is used to show that we can recreate the figures (b and d) from the original by interpolating the raw data, and we contrast this with the raw data and show that the features result from a few pixels in the raw data (g) and are not present in a second equivalent image taken simultaneously (e and h). The impact of this figure is entirely lost without the original images. It has been suggested that we replace these panels with URLs to the original figures, a superb way to guarantee that most casual readers will never see them.

The journals want us to produce content for them, to review content for them, and then to buy this content back off them. They do this while claiming to serve the academic community. This frustrates me, but I am at the start of my career, and I need to play the game to progress. But Wiley go a step further. They then hog this content from fair criticism, and actively hinder scientific debate. This is a step too far.

I am not happy to just keep my head down while a corporate giant tries to hinder work which I poured so much time into. Their decision is petty and short-sighted, but more than that, it shows how we cannot trust the flow of scientific discourse to publishers who care more about profit and their intellectual property than they do about free debate of ideas.

I try to be professional in my work-related online discourse, but I think, on balance, the politest response I can muster is “Fuck you, Wiley”.

29 thoughts on “How can we trust scientific publishers with our work if they won't play fair?”